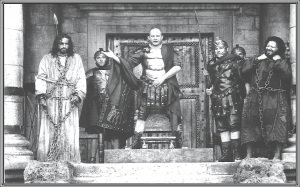 6 Now at the feast he used to release for them one prisoner for whom they asked. 7 And among the rebels in prison, who had committed murder in the insurrection, there was a man called Barabbas. 8 And the crowd came up and began to ask Pilate to do as he usually did for them. 9 And he answered them, saying, “Do you want me to release for you the King of the Jews?” 10

15 So Pilate, wishing to satisfy the crowd, released for them Barabbas, and having scourged[a] Jesus, he delivered him to be crucified.

I saw a video with a bunch of students of preacher commenting on Barabbas. It struck a cord with me. We are all Barabbas. I am Barabbas.

Through sin, I deserve the penalty of that sin, death. How often I have fallen short, committed a sin, feel trapped by sin in my life. Barabbas was infamous for helping to lead an insurrection and committing murder. He was on death row. He deserved the cross. Pilate brought Jesus, the Son of God, out alongside the monstrosity of Barabbas. The juxtaposition of those two people alone makes reflect on my sin and makes my heart yearn for a closer relationship with God. Pilate, it seemed, hoped it would be a no-brainer and that the crowd would release Jesus. Instead, they screamed “Crucify Him.”

Then God, rich in mercy and love for all effectively says, “Barabbas, I will even send my Son to die for you too.” Barabbas is released, Jesus is tortured and then crucified. The wrath of God is poured out on Jesus in that moment.

You see Barabbas is not just some name to be glanced over. Barabbas is you and I. It is a man far from God, guilty of sin and death. Yet, God intervenes. Ephesians 2:8 reads, “For by grace you have been saved through faith. And this is not your own doing; it is the gift of God.” That gift was for Barabbas, it is for you and for me.